From DoctorMyhill
Jump to navigation Jump to search


Are we there yet?

Those who have read my chapter ( ‘Catastrophe Theory and CFS/ME’ ) in Dr Myhill’s book “Diagnosis and Treatment of Chronic Fatigue Syndrome and Myalgic Encephalitis – it’s mitochondria, not hypochondria” (the ‘CFS/ME book’) will perhaps remember that I developed a model for understanding why CFS/ME sufferers experience relapses and what this means for management and treatment.


I was prompted to write that chapter both by observing my own recovery path and also by comments made to me by Dr Myhill about how CFS/ME sufferers seem to ‘slip back’ in their recovery paths and then ‘gain ground’, often in a series of small steps of ‘recovery’.


Once again, I find myself identifying similarities between a mathematical theory and the behaviour pattern of recovery in CFS/ME patients. It seems that I have a habit of choosing the theories with the least motivating names – Catastrophe and Chaos – but please bear with me. The situation is far from catastrophic and certainly not chaotic!


For both of these models, I cannot stress enough that they are just that - models. They are not descriptions of the actual biology at play, and nor are they supported by any medical trials or studies. Instead, these models are observational and serve as analogies to what seems to happen to CFS/ME sufferers. In this sense it is hoped that they aid understanding and give a framework for CFS/ME sufferers to better manage their illness and ultimately to create the conditions, as best as they can, that are conducive to a sustained recovery.


Before I go any further, I must define what I mean by ‘recovery’. When I talk about ‘recovery’ I mean ‘improved functionality’, or ‘feeling better’, or ‘having fewer or less intense symptoms’. I do not mean returning to a state of 100% health. Sufferers will be all too aware that there is a balancing act between these two desirable outcomes:

One cannot seem to have the cake of fewer or less intense symptoms at the same as eating the cake of doing more things!


So, then, my definition of recovery is a sustained situation whereby you can both ‘do more’ and ‘have fewer / less intense symptoms’ AT THE SAME TIME.


It is also important to recognise that recovery is not an event – it is a process.

For most sufferers, CFS/ME is sadly a chronic illness. So, then we are on a journey.


This journey can be long, and it can be truly horrific in its sheer awfulness. For me, at the date of writing this (March 2020), I am approaching my 27 year ‘sickaversary’, having fallen ill on 15 March 1993. Yes, just like Julius Caesar, I should have been wary of the Ides of March! See Wikipedia article on The Ides of March

I have been ill ranging from the severe end of the scale to more moderate levels, but make no mistake, I am still ill. I am still on that recovery path. I was bedridden for nearly 5 years, with all my care needs met by my wonderful wife, Penny. Others have suffered more much deeply, and for much longer periods of time than me. There is no getting around the fact that this illness can steal lives. It really is unique in its devastation. I know this. But I truly believe that there is hope for all.


So, I write in all humility. I do not mean to be glib or to imply that the solutions are easy. But I do believe that the model which follows applies equally to all sufferers of whatever severity. It is, of course, the case that things will be harder, and will take longer, for the severe sufferer but having been there myself, I would not write these words if I did not believe that the same principles apply to all.

What is a journey? Dead reckoning

[See Historical Footnote 1 below.]
In its simplest form, a journey can be described by this ‘Journey Equation’ -

For the mariners amongst us, or indeed travellers of any kind, this is known as ‘dead reckoning’. It is fraught with difficulties, which are, thankfully, not the subject of this article! See Wikipedia article on Dead Reckoning [See Historical Footnote 2 below.]


For now, keep in mind the two elements of the Journey Equation that are on the left-hand side as above, namely:


Now we detour to Chaos Theory for a while before returning to the relevance of all of this to the patterns of recovery behaviour in CFS/ME sufferers.

[Just as with my chapter on Catastrophe Theory, I apologise to those among you who have spent hours of intensive study coming to grips with Chaos Theory. This is necessarily a vast simplification!]

Just like doctors, mathematicians try to impress non-mathematicians with difficult sounding names for their theories. So, it is with the Catastrophe and Chaos Theory. Fear not!


Chaos Theory describes journeys that have different characteristics to the simple Journey Equation as above. So called ‘chaotic behaviour’ (where journeys do not follow the dead reckoning method as above) have been observed in areas such as robotics, cryptography, weather systems, and most importantly here, biological systems.


Just to clarify the language – mathematics is a language above all else. In Chaos Theory

I love pure mathematics – it is my one and only mistress! Penny puts up with Mistress Mathematics. But I also love applied mathematics – to fully understand things, I think most of us need real-life examples and so let’s talk about the weather. What else? We are British, after all.

In 1960 a man named Edward Lorentz (see Wikipedia article on Edward Norton Lorentz) created a weather-model on his computer at the Massachusetts Institute of Technology.


Lorentz' weather model consisted of an impressive array of complex formulae that attempted to predict the weather in the future, given a specific set of weather conditions as of now – the starting weather conditions.


Then came one of those serendipitous moments in human endeavour.


Lorentz was bored with waiting for the computer to give him the figures for the starting weather conditions (‘the initial conditions’) and so he estimated them. [Note – yes in those days, computers were slow!]


He thought to himself that it couldn’t do much harm to make such a small rounding error.


How wrong he was! 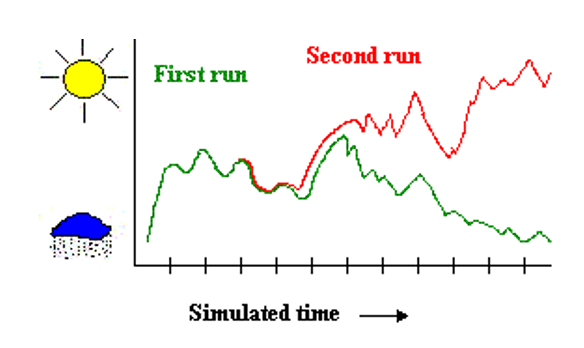 If you have followed this argument, all well and good, but if you need more time to digest what is going on, do take the time you need and read over it again. But, you can be pleased with yourself if you understand the summary below:

So, in general we can conclude that in some situations, looking at a hybrid of the simplified ‘Journey Equation’ and the Chaos Theory model , reproduced here below:

the “Where you start from” box can determine the “Where you end up” box [RAIN or SUNSHINE for Lorentz] to a very large degree, even if what you do ‘in the middle’ is basically the same.

Application to the patterns of CFS/ME recovery paths

Dr Myhill has noticed that the recovery paths of her CFS/ME sufferers have been much smoother and much ‘more complete’ where these sufferers have fully put into place her ‘Basic Package’ of interventions that everyone should do.

The Basic Package is:

The Bolt on Extras can be seen summarised here - Overview of CFS/ME protocol but include interventions directed at such diverse areas as:

Now if we make the following analogies:

Then we can see how this model gives a framework as follows:

So, from Dr Myhill’s experience, and using Chaos Theory as our model, we can see that getting the Basic Package ['where you start from'] in place is a very large determinant of a good sustained recovery path ['where you end up']. If you don’t get the Basic Package in place fully, and yet you do put in place all the Bolt On Extras you may find that your recovery path is bumpy and sporadic or worse still you may find yourself under a RAIN cloud rather than in the SUNSHINE.

Like all models, this one has its flaws but my hope in doing this has been to show how important ‘where you start from’ can be to ‘where you end up’. It is in some ways an unexpected result as the intuitive thing would be to think of the ‘in between’ bit of the journey to be the most important, and of course these bits are important, but time and time again, Dr Myhill has seen that getting the Basics right (where you start from) has been the most important determining factor for the recovery path (where you end up).


Of course you do have to keep on doing the Basics all the time!


Those who know me from the Facebook groups and elsewhere will know that I am not a naturally dogmatic person and so the fact that I have taken the time to try and spell out this idea perhaps shows just how important it is.


Not every sufferer is the same and such articles are necessarily generalisations. From what I know of CFS/ME sufferers they are a bright and compassionate bunch of people, and so I implore you, dear reader, forgive me for my simplifications and then I can sleep safe in the knowledge that you have the intellect to apply the thrust of this idea to your individual cicumstances.


Never ever give up! 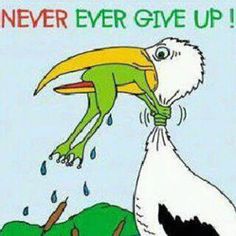 For an outstanding example of Dead Reckoning, please see The Voyage of the James Caird This was a journey of 800 miles from Elephant Island in the South Shetland Islands through the Southern Ocean to South Georgia, lead by Sir Ernest Shackleton during the Imperial Trans-Antarctic Expedition of 1914–1917. This navigation, in a 22.5 foot lifeboat, and through the "Furious Fifties", known for their 60 foot waves and hurricane-force winds, is thought by many to be the greatest small-boat journey ever completed and it owed its success not only to the men aboard, but also to some fairly good Dead Reckoning!