From DoctorMyhill
Jump to navigation Jump to search

Please see My book "The PK Cookbook - Go Paleo-ketogenic and get the best of both worlds" for more detail. 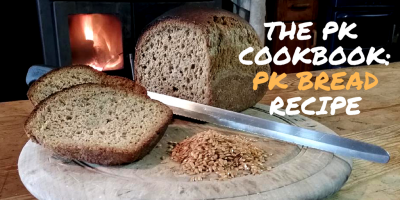 This page is one of 4 pages on the Paleo Ketogenic Diet. Please see also:

The single biggest reason for lapse on the PK diet is absence of bread. To secure the diet for life you must first make PK bread. I have searched and nothing is currently available commercially which passes muster. Loaves will become available as demand builds, but in the meantime you have to make your own bread.

If you have any friends or family offering to help you, then top of the list must be “please make my daily bread!”.

PK bread consists of just linseed, Sunshine Salt and water. Americans, and others, may be more familiar with linseed being referred to as flax or flaxseed or common flax. There is technically a subtle difference - flax is grown as a fibre plant that is used for linen. Linseed is grown for its seed. The flax plant is taller than linseed and is pulled by hand or nowadays by machine.

My journey with PK Bread

When I first started to develop PK Bread, I thought I would have to preface all references to it with……

"Do not expect this bread to taste and perform exactly like a conventional wheat-based loaf”.

How wrong could I be?!

My PK bread recipe evolved so much in my six months of experimentation that many of my greatest critics (one of which is me!) have been won over. The resultant loaf, made with golden linseed, looks exactly like a small brown Hovis.

Even if the loaf does not initially taste good to you, keep at it. Taste is acquired. A dear friend and colleague, namely the late Dr Alan Franklin, consultant paediatrician at Chelmsford, ran a trial with his allergic children. They, too, had to avoid grains and dairy. With their agreement Dr Franklin’s patients ate a portion of their least favourite food daily. This included foods that kids often dislike such as Brussels sprouts, mushrooms and avocado pears. No child had to eat the food more than 14 times (ie two weeks) before coming to like it.

We are not born with taste preferences, we acquire them. Primitive man, pottering through the jungle, would have tried new foods with great suspicion and reluctance. However, if he was not poisoned, but rather nourished by that food, then he would eat more and more of it and eventually would come to like it. By way of association of sensation, taste and satiety, he would progress to actively seeking out that food. In the long term he would farm and harvest such.

The above scenario reflects my personal journey with linseed bread. I initially viewed my dark brown brick with distaste and suspicion. I forced it down out of a sense of loyalty to the diet. However as I perfected the recipe I have come to look forward to and love it. It has character, texture and taste. It forms part of every breakfast and supper. My breakfast invariably has PK fried bread ie linseed bread fried in coconut oil or lard. My suppers often start with PK toast.

Linseed is particularly helpful because the PK diet can make one constipated. The high fibre content linseed mitigates this. This fibre is fermented in the large bowel to produce short chain fatty acids. These nourish the lining of the large bowel directly and this is highly protective against bowel cancer. Fermentation of vegetable fibre also produces hydrogen and methane. These gases make you fart. These farts are odourless. Put a match to them and they will explode ………not that I recommend this for diagnostic purposes! If your farts smell offensively then that is due to poor digestion of foods – the fermentation of protein produces the disgusting pong of hydrogen sulphide! The constituents of smelly farts are carcinogenic ie you can determine the potential health of your large bowel by smell.

Indeed, Professor Gibson, a food microbiologist from the University of Reading, divides people into “inflammables” and “smellies” – the inflammables (hydrogen and methane) have normal gut fermentation and the smellies (hydrogen sulphide) do not!